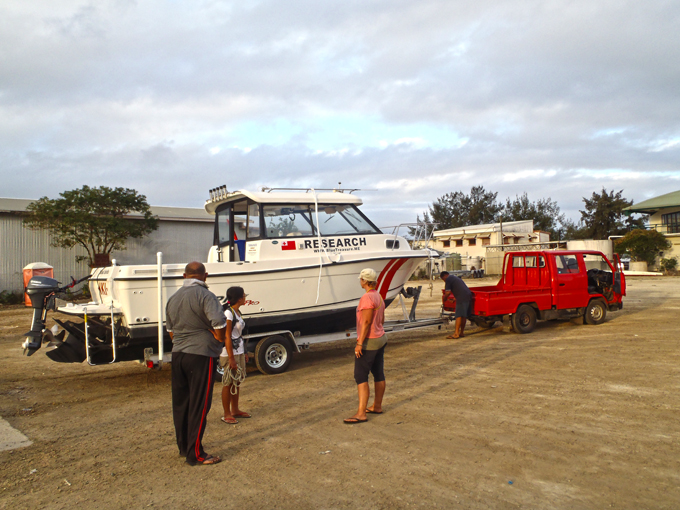 ‘IKI’ is a big little boat which hit home as the light truck we were launching her with started to slide down the ramp backwards with brakes on!

With 83 gallons of fuel on board, I reckon she is getting close to three tonnes! With the sun getting low after another big day, Brownie headed over to ‘Bill Fish’, the local watering hole (where Annette has her name on the wall and a private glass in the fridge filled for free once a day – awarded for consuming 100 beers!) as there was a ‘Troopie’ 4 wheel drive in the car park.

He found the owner, who said yes, so we hooked up! While Joshua’s 12 year old daughter Dua cracked a coconut over the bow christening her and bestowing good luck on the crew, ‘IKI’ slipped into the water on the same ramp that we launched ‘Talisker Bounty Boat’ in April 2010.

So ended a pretty busy six days for our trusty crew, driven on by the prospect of some diving and fishing ‘sea trials’ in the days ahead. We can’t hunt wrecks yet as we are still waiting for our Marine Magnetics ‘Explorer’ Magnetometer. Turns out the ‘guts’ of it is smashed and that leaked fluid into the electronics. The funny thing about warranties, is that it does not cover breakages, so even after paying the $10,000 to repair it and waiting another two weeks, if it happens again… bad luck?

We have handled the unit like ‘eggs’ and the manufacturer will not, or cannot define how fragile the unit is? Nor if it is happening with other units that may suggest a design issue? So unlike units I have used in the past, I am starting to think that while on paper it stacks up as the best on the market, we may be handling a time bomb! Only time will tell of course, but we feel like we had just been beat up! And then put a match to $10,000 and breathed in the smoke. All part of the fun!

We towed ‘IKI’ to ‘ICE’ as we are yet to complete all the prestart checks and replace the oils and fluids in the Mercruser. The Yamaha ‘thruster’ outboard is also brand new and needs to be run in.

One thing of note is that there were no sparks or fires when we turned on the electrical systems. This really surprised a few of us as Brownie had reconnected everything! Just to top that, we think he has fallen in love again, as he slept on board last night. Either that or he was worried she may sink, cause he was responsible for putting in the ‘bung’. He was still afloat this morning!

She looks great, will be perfect for the job ahead and we are all happy about that. Personally I feel grateful for once again having an understanding and hardworking crew.

Life is an adventure, which has an unknown outcome and there have been plenty of them this season! We are all making the best of it!