Born in Adelaide in 1955, Don McIntyre has been adventuring all his life.

In 1993 the Australian Geographic Society awarded Don a silver medal for his ‘Spirit of Adventure’ shown during the ‘Teddy Bears to Antarctica‘ expedition.

Thirteen years later, in 2006, he and then wife Margie, were both awarded a gold medal, as the Australian Geographic Society’s ‘Adventurers of the Year’ (the youngest ever to receive it) for their year living ‘Together Alone‘ in a box, in Antarctica.

Finally, in 2012, the Australian Geographic Society, recognising his many diving expeditions over the years and his ongoing efforts to promote adventure, presented him with its highest accolade, a gold medal for a ‘Lifetime of Adventure’. This was only the 12th time it had been presented in the 25 year history of the society. The inscription on this ultimate gold medal simply read ‘For a life spent encouraging Adventure and Discovery’. Humbled to receive it, Don thanked Margie, past sponsors, Dick and Pip Smith, and then boldly declared that he was not yet retired!

In October 2014, Don received the prestigious ‘Emerald Award’ from the Sydney Institute of Marine Science (SIMS) in honour of a lifetime of adventures that have done much to raise awareness of the marine environment and the need to protect it. 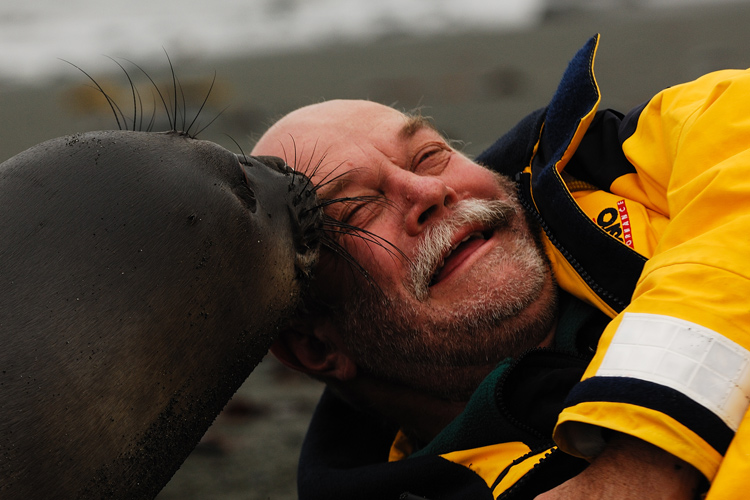 Starting his first business while at high school selling 'teddy bears', Don McIntyre turned down a scholarship to a fine arts degree and instead trained as a photo-lithographer and photographer.

Between adventures, he eventually moved to Sydney marrying Margie and so started their BOC efforts. In 1983 they started a marine equipment importing business that would fund his BOC Challenge ambitions. This moved on to building yachts up to 16.3m.

Following on from his first Antarctica sailing expedition in 1993, Don then started professional expeditions sailing to Antarctica and around the world. Operating his helicopter equipped Ice ship 'Sir Hubert Wilkins' was all consuming and his other business interests began to slow down leading to the decision to take up adventuring full time. Completing a successful subdivision development in Hobart opened new horizons and the construction of 'ICE' began in 2005.

In 2004, Don accepted a position with Orion Expedition Cruises as Antarctic consultant, establishing the entire Antarctic program for the company and then acting as expedition leader on all future Antarctic expeditions for the next 10 years. The ship was sold and he moved to Heritage Expeditions in NZ during Antarctic summers. He is an industry representative on Antarctic issues for the Australian Government and sits on various Antarctic committees.

Don is a sought after media commentator and writes a regular adventure column and occasional features for Australia and New Zealand's largest selling Boating magazine, 'Tradeaboat'.

Over the past 30 years, Don has written hundreds of magazine articles and one book, produced a few documentaries and appeared in hundreds of national television segments, including five appearances on '60 Minutes'. He is an accomplished public speaker, always well received by any audience. Don is writing two new books, 'Chasing Bligh' and 'What Next', with the 'Talisker Bounty Boat' documentary due for completion soon. Don was project manager for a 24m high latitude explorer trawler yacht built in China.

In late 2011, Don formed a new company 'Tonga Blue Ltd' which was to assist Tongans recover their lost maritime history and archaeological treasures. In 2015 that included establishing the Royal Nomuka Yacht Club and a Marine Discovery centre on the island of Nomuka IKI. Five years of effort and over $500,000 was wiped out completely in January 2022 with the Volcanic explosion and Tsunami that destroyed everything.

Don McIntyre is recognised as one of Australia's major adventurers and explorers.

In the spirit of the original 1968 Sunday Times Golden Globe Race. A journey back in time!

In the spirit of the original 1973 Whitebread Race. Celebrating its 50th anniversary.

In the spirit of all 'mini yacht' circumnavigators, celebrating John Guzzwell and Trekka.