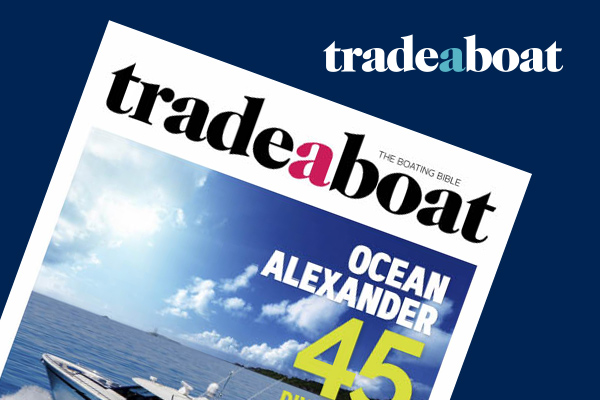 Don McIntyre’s column ‘Ocean Adventures’ was published every month in the ‘Tradeaboat’ magazine. Here is an archive of Don’s writings.

468: Time to Bugger Off Life flies, so don’t let it slip by or you may just regret it.

467: Cook, Bligh, d’Urville… and me Searching for the Astrolabe’s missing anchors and hanging out with the rich and famous and not-so-famous in Fiji.

466: A Simple Adventure, Bigtime Simple in concept, the 2018 Golden Globe Race re-enactment has attracted worldwide attention and is beyond the point of no return for the organisers… me!

465: Tooth Hurty It’s dentist time, and in China this is analogous to boatbuilding – you get what you pay for.

463: Another Voyage For Madmen 20 years evolving from a personal adventure to a 50th Anniversary 2018 Golden Globe Race.

462: Cold Deadlines Voyaging to Antarctica on a 3-star Russian ship can really be fun after ten years on a 5 star!

461: Happy Birthday To Me Yes I am still alive! And having fun.

460: Merry Christmas… I’m Crazy! Crazy – Patsy Cline sang it, Don continues to do it. What’s it like? Don looks at the literature and decides it’s just life.

458: Should I or Shouldn’t I? That is the question, if you’re procrastinating for the chance to circle the globe in my voyage of imagination grand adventure. Here’s some advice.

457: Voyage Of Imagination The plan, the boat and the logistics are in place. All Don needs now is crew to fulfill his next sailing adventure. Is that you?

455: This Boating Life It’s the life for me, the good and the bad, so get aboard and chase your dreams.

454: Bring It On Meet my new crew for our next wreck diving adventure in the tropical waters of Tonga.

453: Mother and Son There are big events in all our lives that we remember forever. I just had one.

445: Shiver Me Timbers! At last, a dream becomes a reality for Don and co, searching Davey Jones’ locker for historical relics in the South Pacific.

444: Tongan Tribunals Don appeases some very unhappy Tongans and dispenses some pearls of wisdom for those of us confronting a personal terror that’s actual or mental.

443: Challenges In Tonga One person’s picnic can be another’s adventure… Blue Base.

442: Life is a Gamble Don is packed and off to Tonga for a new chapter in his life’s adventure.

441: Not Me? Office workers know only too well the ramifications of a computer meltdown and no backup. It’s finally Don’s turn to go through this modern-day affliction before getting into some ‘island’ towing cloud 9.

440: My Man Don reveals the influence English boating adventurer David Scott Cowper has had on his life.

439: Want To Be An Explorer? Don announces a once-in-a-lifetime offer to sponsor two young people on a 10-week dive adventure in Tonga.

438: A Real Life in Real Time It’s time to pull your head out of the virtual sand and get back into the real world, says Don.

436: Cultural Vandalism in Tonga An open letter to the people of ‘The Friendly Isles’.

435 Game On! Wreck diving and filming documentaries are in store for Don and crew this year. In the interim Don is keeping ICE safe in a hole for cyclone season.

434: Dreams Happen A student of Don McIntyre’s dreaming, Tobias Fahey, 26, is attempting a quest to become the fastest Australian to complete a solo, non-stop and unassisted global circumnavigation in the 50-foot yacht Sea Quest.

433: Live Life Large It feels good to be alive folks, it’s cheap in some parts of the planet.

432: Shark Attack! Paradise one day, survival the next. Don recounts that day last month, when his crewmember Kylie Maguire survived a shark attack in Tonga.

431 Surf, Wreck and Reefs In the hunt for shipwrecks, ICE narrowly escapes becoming a statistic herself after striking a coral reef, but Nirvana quickly returns on a classic surf day.

430: Mega Tonga Still in Tonga, the crew on ICE are doing it tough — bodyless fish, castaway survival and missing treasure — but they wouldn’t be anywhere else.

429: A Lost Art Lifetime of Adventure Award. Don reveals that there is a plan to removing compulsory sextant training for commercial Ship’s Masters — what would Bligh think?

428: And The Bad News Is Whatever can go wrong, will go wrong — is also an aphorism of the cruising sailor, not just Murphy’s… and Don loves it!

426: Crazy Crew Don is at sea again, this time in Fiji, with a new crew on a treasure hunting adventure.

425: Make Your Own Luck Don hints at more adventures in Tonga and goes on a long road trip through the southern states, picking-up a hitchhiker along the way.

424: Responsibility, It’s Your Call Whether you’re a five-star explorer or a crazy do-or-die adventurer, risk taking can involve putting the lives of others at peril. Don says it’s best to play by the rules.

423: Why Did I Do It? Don reveals his purpose in life, where adventure and experiences reign above the comforts of modern consumerism.

422: For Kids’ Sake Don is back in marine suburbia with liveaboard families as neighbours, reminding him of the early life of one solo sailor, Jessica Watson.

421: Turning a New Leaf Don knows the power and sway of books. But his latest find is right up there with the best-ever reads.

420: Wherefore Art Thou, Don? Don says questioning dreams will either stop you in your tracks or see you constantly cruising the globe.

419: Paradise Lost Don and crew remain marooned in the Pacific and it’s not all paradise, but there’s time for plenty of varied reflection and words of advice.

418: Battle For Tarawa Engine woes have Don and crew marooned on Tarawa Atoll in the Pacific. Sadly, it’s not that idyllic a place.

417: Self Rescue Don loves adventures and gets one when his motor dies a long way from anywhere in the Pacific Ocean, lost at sea, crayfish and risk.

416: Don’s Party The people you meet. Don and crew spend six weeks in Palau and mingle with a disparate but likeminded bunch of cruising adventurers.

415: Pots of Gold Having realised their cruising dreams, some adventurers simply walk away and leave a bargain.

413: Going Soft Instead of a starvation diet or shivering in polar climes, Don opts for all-out luxury in his forthcoming Pacific Ocean expedition.

412: Poles Apart Three tales from the South Pole: one tragic, one almost tragic, and another safely averted.

411: Things Happen! Do things and rewards will follow. Don details his new high-seas boating adventures from the tropical Philippines to Antarctica.

408: Egging You On Don rates adventures like he does eggs – soft, medium or hard. Young endeavour. Meaning of life.

405: Just Do It Don is back after the bounty voyage a lot thinner but still keeping the dream alive.

401: Mutiny on the Bounty Boat Don loses half his Talisker Bounty Boat crew, but quickly finds replacements and is a hit in Tonga.

400: High Achievers As this 400th edition of Trade-a-Boat hits the stands, Jessica Watson is heading home, and Don McIntyre is about to sail across the Pacific Ocean in an open boat.

399: Mutiny On The Bounty The harsh reality of repeating Captain William Bligh’s brilliant feat of crossing the Pacific Ocean in an open boat strikes down the crew after one day of training.

398: Whale Wars Our seasoned deep-south sailor is caught in the thick of the whaling wars in Antarctica.

397: Young And The Restless Our man Don, master adventurer and inspiration to all, is seeking youthful new crew to sail forth this year.

395: Inside Running On Jessica Watson Our seasoned adventure writer is backing teen solo sailor Jessica Watson and her quest to be the youngest past the post.

422: Bounty Boat Madness Four strangers, 4000 miles, one open boat, limited rations and water, no charts, no modern nav gear, and no toilet paper. Welcome to Part I of Don McIntyre’s re-enactment of Captain William Bligh’s 1789 journey from Tonga to Timor. Oh, and just for authenticity, throw in a mutiny.

423: All At Sea Part II of Don McIntyre’s re-enactment of Captain William Bligh’s 1789 journey from Tonga to Timor, through the eyes of crewman David Wilkinson.